Nowadays, hydrogen is often associated with the energy transition. However, research and medical studies on the effects of molecular hydrogen have intensified since 2005 at renowned universities and research institutes located mainly in Japan, Korea and China. These medical and scientific studies, more than 500 conducted to date, show that molecular hydrogen will introduce a new era also in medicine.

The term "oxidative stress" generally refers to damage to the body, resulting from disturbances in endogenous cycles that cause oxidation of the body's substances. These disturbances are caused by reactive oxygen species (ROS), to which many ("civilizational ") diseases are attributed, but also aging in general. 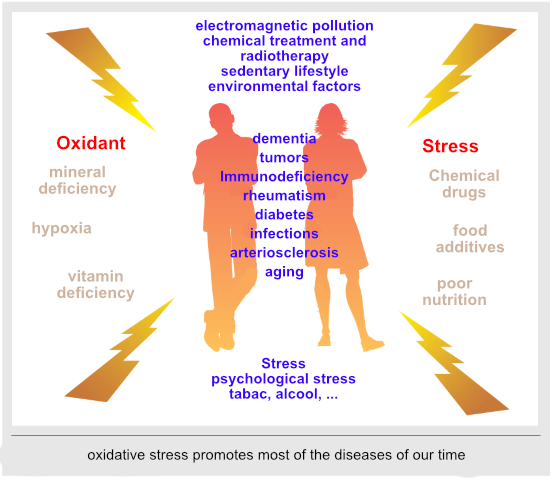 ROS are of exogenous origin under the influence of environmental factors of all kinds, but also endogenous by the incomplete neutralization of oxygen molecules in the respiratory chain of cells. It is commonly accepted that about 2% of oxygen molecules are not fully neutralized in water during the energy production process in mitochondria and that they mainly oxidize and indiscriminately damage molecules in the body in the form of highly reactive hydroxyl radicals (OH•). A healthy immune system can neutralize ROS with antioxidant actions.

Current immune system strengthening protocols to fight ROS focus on taking antioxidants (e.g. vitamins, carotenoids etc.). Synthetic studies, however, show that taking high-dose antioxidants preventively has no significant action, it could even have harmful effects. This is because antioxidants attack all oxidation processes in the body and can therefore affect the vital mechanisms of the immune system and energy production. 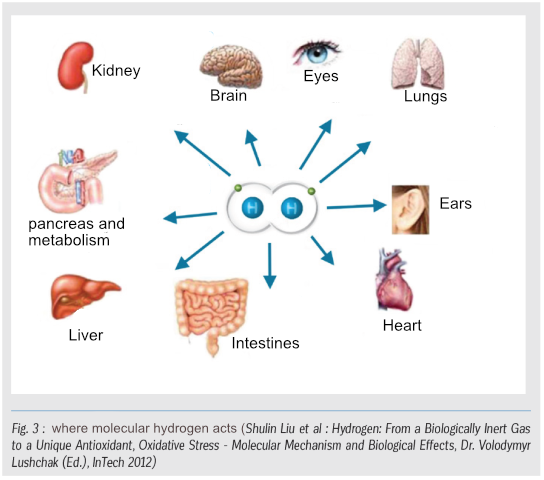 In case of lesions of ischemia reperfusion. If blood circulation is restored to an organ after ischemia (insufficient blood supply), severe reperfusion lesions/oxidative inflammatory reactions frequently appear such as after transplantation, heart attack, stroke, bypass, glaucoma, etc., and are often more devastating than ischemia was originally. They can be mitigated or avoided by the prior or simultaneous intake of molecular hydrogen. [3]

In case of cardiovascular diseases such as infarction, stroke, arterial obliterans, etc. They are caused by deposits in the arteries and the resulting high blood pressure. Current studies show that molecular hydrogen significantly improves arterial blood flow and decreases blood pressure. [5]

In case of neurodegenerative diseases such as Alzheimer's disease, ALS, Parkinson's disease, etc. They appear with the progressive loss of nerves and nerve functions, caused mainly by mitochondrial failures and oxidative stress. Molecular hydrogen has been shown to reduce oxidative stress and nerve loss also in the brain. [6]

In case of infections and sepsis, resulting from the absence of an immune response. They are a common cause of death in hospitalized patients. In animal experiments, it appears that even serious infections can be resolved under the effect of molecular hydrogen and sepsis is significantly reduced. [7]

In case of aging, diseases and skin lesions in which oxidative stress plays a decisive role. Unlike cosmetic and pharmaceutical treatments, molecular hydrogen reduces oxidative stress in the skin, firms it and stimulates collagen production. [9] It prevents inflammation and allows for rapid healing in case of burns and sunburns. [10]

To stimulate fertility, healthy pregnancy and birth. Since oxidative stress affects sperm motility as well as fetal growth, it is not surprising that in animal experiments, there has not only been an improvement in sperm quality [11] and stabilization of the placenta [12] thanks to molecular hydrogen, but also a higher survival rate and healthier subjects in case of infections [13] or early births [14].

In case of inflammatory diseases. The body responds to injuries or foreign bodies with inflammation and rising temperatures. The healing process is accompanied by oxidative stress, which can cause other disorders. Molecular hydrogen relieves inflammatory lesions in general [15] and can even make symptoms disappear when they appear in autoimmune diseases like rheumatoid arthritis [16].

In cases of damage to internal organs by chemical, physical or biological factors, molecular hydrogen has been shown to have a soothing and healing action, and whether the lesions are located in the brain [17], lungs (e.g. caused by tobacco, COPD [18]), kidneys [19], liver [20], pancreas [21] or heart. [22]

Molecular hydrogen can contribute to the improvement of sports performance by preventing fatigue and contractures by reducing oxidative stress in the muscles and thus increases its power density and endurance. [23]

This still incomplete overview shows that there are hardly any diseases or disorders for which the soothing and beneficial action of molecular hydrogen cannot be used, especially since no interaction with other treatments or adverse effects have been observed.

Therapeutic use aside, molecular hydrogen is also naturally predestined for daily prevention, since excess oxidative stress is the unavoidable consequence of a "modern" lifestyle.

It would be desirable for there to also be doctors in the German-speaking regions who include molecular hydrogen in their therapeutic protocols in order to gain experience and develop knowledge here too in the interest of patients.

Read also : What is hydrogenated water

[5] He, B., et al.: Protection of oral hydrogen water as an antioxidant on pulmonary hypertension. Mol Biol Rep 2013